What is IK Rating for LED Lighting? IK08 for LED Street Light

Before the appearance of the IK code, the anti-impact code often appeared together with the IP rating protection to indicate the level of its impact protection, such as IP65(9), which is distinguished from the code of the IP protection level by brackets, but it was later canceled internationally. It is marked with the IK code and is still in use today. 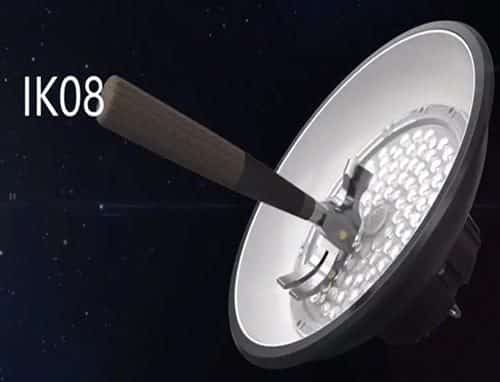 The IK level is an internationally accepted digital code used to indicate the protection level of electrical equipment enclosures against external mechanical collisions. For outdoor equipment, whether it is suspended, buried in the ground or placed outdoors, it needs to have corresponding IK requirements. According to the standards of IEC 62262:2002 and IEC 60068-2-75:1997, it is the protection ability of the electrical equipment shell to the internal equipment when it is impacted by external force. For LED lamps, it is simply whether the internal circuit of the lamp is dropped or impacted. Is it still working properly if it is damaged? In the lighting industry, it is necessary to make IK protection levels for outdoor flood lights, street lights, stadium lights and some special lights. After all, the use environment of these outdoor lights is often harsh, and it is necessary to check whether the protection level of the lighting product shell Meet industry and national requirements. Usually we use a spring impact hammer or a free fall pendulum to hit the lamp to determine its IK rating. The unit of IK rating is Joule.

So what are the IK ratings that we often use for led lighting?

In the IEC62262 protection level code, it consists of two numbers, namely IK01, IK02, IK03, IK04, IK05, IK06, IK07, IK08, IK09 and IK10. The 10 levels are divided into two groups of tests according to different levels of testing: the first group is the spring impact hammer test from IK01 to IK06. This group of tests has relatively small energy (from 0.14J to 1J) and is generally suitable for Indoor LED lamps such as downlights, high bay lights; the other group is a large pendulum test from IK07 to IK10, the test energy is larger (ranging from 2J to 20J), suitable for street lights, stadium lights, explosion-proof lights IK level test.

In the LED lighting industry, general customers have IK Rating requirements for outdoor lighting and industrial lighting, so what are the corresponding IK ratings?

LED Explosion-proof lighting:IK08 or above